Everything you need to know about vanilla and more!

Vanilla, with its delectable aroma and flavor, is the second most expensive spice in the world after saffron, and most widely used flavoring in baking, confectionery, desserts, and ice cream.

The name Vanilla in Spanish is from vainilla, the diminutive of vaina (pod), and its flavoring — often regarded as the world's most popular flavor — is derived from the cured unripened pods (vanilla beans) grown from orchids from various species of the genus Vanilla. 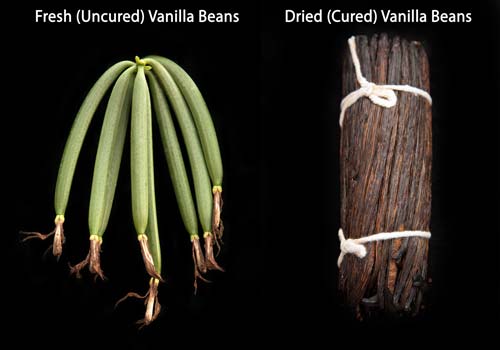 The orchid that gives us vanilla flavoring is unique in a family that abounds in idiosyncrasies. Beyond the fact that it is the only orchid cultivated for a commercial product of worldwide use, the vanilla plant itself is distinguished on several counts the 27,800 members of the orchid family.

First of all, it is a vine — and almost no vines are known in the entire family outside the genus Vanilla. This is a tropical group of about fifty members, or species, several of which have aromatic pods, and one of which, Vanilla planifolia, — the flat-leaved vanilla, which is identical with the species appropriately called Vanilla fragrans — is the source of ninety percent of the pure vanilla on the market.

From an artistic and aesthetic point of view, orchids are universally accorded first place in nature. When a wild vanilla plant starts to grow, it takes root in the soil, just as a Virginia creeper or any other vine would do. If it is at the base of a tree, it climbs steadily, clinging to the trunk by its aerial roots until it finds enough sunlight near the top to enable it to flower, and can grow up to 30 feet long. Other orchids that have their roots in the ground remain close to the ground all their lives. Those that normally start their life cycle in the trees — as many tropical species do, perching on the branches—get their support and sustenance from their spongy, white, absorptive aerial roots; these have no true roots in the soil at all. But the vanilla is exceptional in that it has both kinds of roots functioning at the same time. It possesses a dual nature, behaving as a terrestrial plant and also as an epiphyte, living chiefly on the atmosphere.

Also among the vanilla orchids are found the only ones with succulent leaves, stems, and roots; likewise the only ones having fleshy instead of dry seed-pods.

Even the individual vanilla seeds and pollen grains are unusual if seen under magnification. The pollen grains, which in all members of the orchid family are held together in a sticky mass, lack the customary connective threads; each grain remains distinct. The tiny seed of vanilla, instead of having the usual microscopic, net-like structure around a transparent wall, has a relatively thick, black, opaque wall, the contents of which apparently contribute to the oily, balsamic pulp in which the seeds are embedded. Only two or three other orchids have seeds like this, and one of these (Selenipedium), colloquially called by the Spanish name of “vainilla chica,” or little vanilla, is used in place of true vanilla in those Latin American countries where it is native.

category
/Vanilla 3 2 Vanilla https://www.beanilla.com/vanilla 1 2
Category
Wish List
Last Added Items
Go to Wish List
You have no items in your wish list.
Learn How To
Scroll to Top of Page