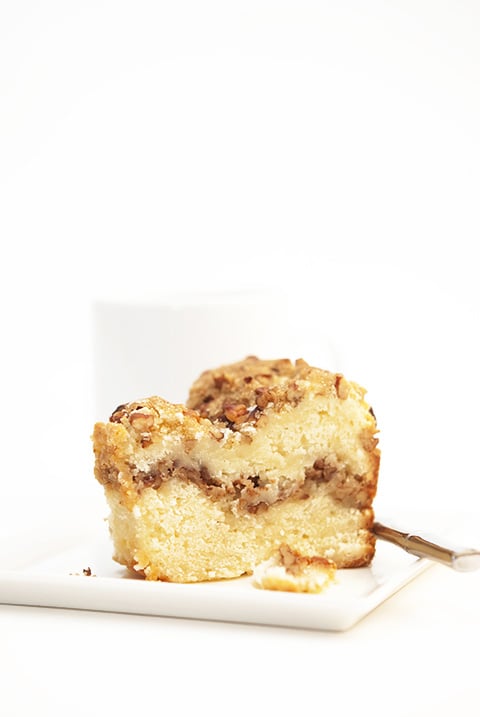 My house is full of the aroma of baked goods; raspberry crumb bars, gooey caramel pecan bars and, my personal favorite, cinnamon pecan coffee cake. There is something very special and incredibly delicious about a really good coffee cake. The perfect way to start, or end, any day! This coffee cake is moist and rich, with sweet ribbons of cinnamon, and pecans enhancing the double-fold Madagascar vanilla extract that is used in this recipe.

The renowned Bourbon appellation of Madagascar is a sure ticket to the deep creamy and sweet notes that made this origin famous for vanilla. The quality of the vanilla beans used in this extract are known as "splits", which are achieved when the farmers leave the pods to mature on the vines a few weeks after conventional harvest time. This gives the finished product a full body impact and a remarkable after taste.

We offer this premium extract in both single-fold or double-fold solutions. Our 2-Fold extracts are made with twice the amount of beans used for the same volume of single-fold extract. This results in a more concentrated (double-strength) extract that only requires you to use half the amount normally used in recipes.

To make the filling, combine the light brown sugar, flour and cinnamon in a bowl and stir with a fork to mix everything well. Place the pecans in another bowl. Set aside. Place the cinnamon mixture, pecans and melted butter aside.

Cake batter: combine the flour, baking powder and salt in a bowl. Stir the vanilla extract into the milk. In a large bowl combine the butter and sugar, and beat with a mixer on high speed until pale yellow and evenly mixed, about 2 minutes. Scrape down the bowl to ensure a good mix. Add the eggs and beat for another 2 minutes, scraping down the bowl, until the mixture is smooth.

Use a large spoon or spatula to add about a third of the flour mixture to the butter mixture and stir only until the flour disappears. Add a third of the milk and mix in. Repeat twice more until all the flour and milk mixtures have been incorporated. Stir just enough to keep the batter smooth.

Spread half the batter evenly into the prepared pan. Sprinkle half the cinnamon mixture over the batter followed by half the melted butter. Scatter half the pecans over the top. Spread the remaining batter carefully over the filling, using a spatula to smooth the batter all the way to the edges of the pan. Top with the leftover cinnamon, butter and nut mixture, covering the cake evenly.

Bake for 45 to 50 minutes, until the cake is golden brown. Place the pan on a wire rack and allow to cool in the pan for 5 to 10 minutes before cutting into slices.