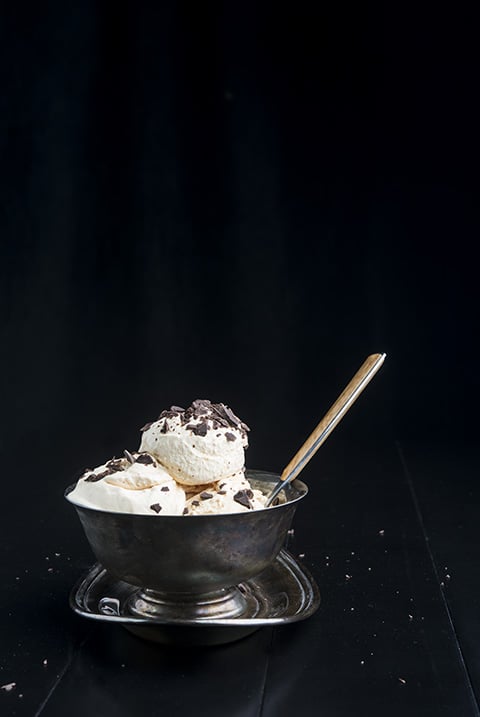 I know it's cold and I am sharing an ice cream recipe. It's pumpkin season and although I am a huge fan of all things pumpkin, I can only eat so many pumpkin bread slices and muffins. Pumpkin ice cream is the perfect way to get your fill of pumpkin flavor without the overly filling denseness of a muffin or bread. Smooth and creamy with just a hint of spice, pumpkin chocolate chunk ice cream is the perfect accompaniment to pecan pie or simply enjoyed on its own.

Ice cream is incredibly simple to make at home. A simple base of eggs, sugar, half/half and cream is cooked until it coats the back of a wooden spoon. The mixture is then strained to yield a perfectly creamy and smooth base. At this point the pumpkin puree mixture is added but honestly anything can be added to this ice cream base. Do you love cookie dough? Add some during the churning process. Can’t get enough candy canes? Add a teaspoon of peppermint extract and some crushed candy canes to the base.

Pumpkin is pretty bland on its own, but when combined with vanilla and cinnamon the flavors begin to come out. Ceylon cinnamon is the preferred cinnamon for this recipe. Sri Lankan cinnamon (aka: Ceylon cinnamon) is smooth and aromatic with hints of citrus, sugar, and butter. Madagascar vanilla is the epitome of vanilla flavor, it is most often the flavor and aroma that is associated with vanilla and vanilla products. The flavor is rich, dark and creamy with an overwhelming sweet, buttery aroma. The perfect addition to all of your baked goods and pastries!

Overwhelmed with the heavy fall selection of donuts, muffins and sweet pumpkin breads? Whip up a batch of pumpkin chocolate chunk ice cream. Your sweet tooth will thank you!

Pour the half and half and cream into a large saucepan and heat gently, stirring occasionally, until the mixture begins to lightly bubble around the edges.

Meanwhile, whisk the egg yolks in a heatproof bowl until smooth. Add 1/3 cup of the sugar and whisk until pale and slightly fluffy. Gradually and slowly, pour the hot milk into the egg mixture while whisking continuously to prevent the eggs from scrambling. Return the mixture to the saucepan and place over low heat, stirring frequently, until the custard thinly coats the back of a wooden spoon approximately 3-4 minutes. Do not let boil.

Pour back into the bowl and set aside for about 30 minutes, stirring occasionally, until cooled to room temperature.

Put the pumpkin, cinnamon, vanilla extract, and remaining sugar into a blender or food processor and blend until smooth. Add to the chilled custard and whisk well. Pour the mixture into an ice cream machine and churn  according to the manufacturer's instructions. Add the chopped chocolate halfway through the churning process.

When the churning is completed, use a spoon or spatula  to scrape the ice cream into a freezer-proof container with  a lid. Freeze until it reaches the correct scooping texture (at least 2 hours).