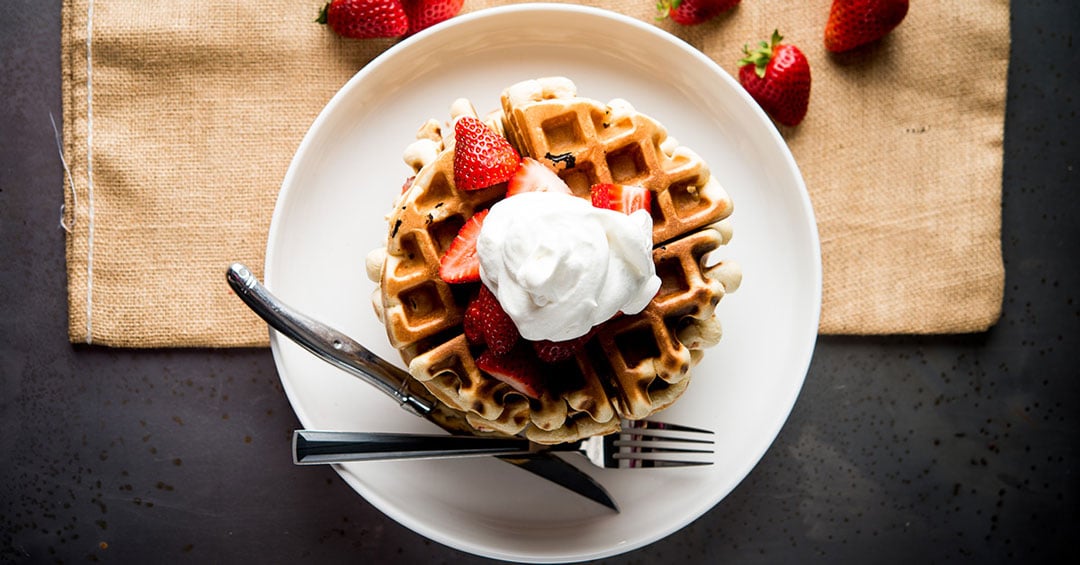 The weekend is almost here, and with it, the chance to slow things down a bit. There are few greater pleasures in life than a leisurely morning spent sipping coffee, listening to music, and cooking up a delicious breakfast. Sure, you could easily pour a bowl of cereal, or toss a bagel in the toaster. But why not take your time to make something a little more special? These waffles with strawberries and whipped cream are at once light, fluffy, and decadent. They’re the perfect way to ease into a relaxing weekend.

The history of waffles dates all the way back to ancient Greece, where flat cakes were often cooked between two metal plates attached to a long handle. During the Middle Ages in Europe, this concept was taken a step further with the addition of patterns etched into the metal plates. Originally, these were used to emboss religious imagery onto communion wafers. Over time, however, a secular version of these thin wafers (called oublies) emerged and became a popular snack.

Early waffle recipes were quite different from the fluffy fixtures we know and love. They did not include any sweeteners or leavening agents, meaning they would remain flat when cooked. They also often included savory fillings, such as cheese, placed between two layers of batter. Interestingly, many early recipes also included wine as an ingredient (a tradition we wouldn’t mind making a comeback).

Waffles have been widely consumed in America since before the country was even founded, having traveled with Dutch settlers to the New England colonies as early as the 17th century. Stovetop waffle irons helped further popularize the food during the 1800s. General Electric began producing the first electric waffle iron in 1918, and from there the nation’s love affair with the dish only grew. While waffles are now easier to make than ever, there’s still something special about the ritual of mixing up some batter from scratch and patiently waiting for it to reach that perfect golden-brown color. Add some strawberries and a dollop of whipped cream and indulge. You deserve it.

In a mixing bowl, whisk together the sugar, eggs, milk, butter, and vanilla extract. Add the dry ingredients and whisk to combine. Fold in the frozen strawberries and juice.

Pour batter into waffle maker and cook according to manufacturer’s instructions. Top the finished waffles with fresh strawberries and whipped cream. Enjoy!