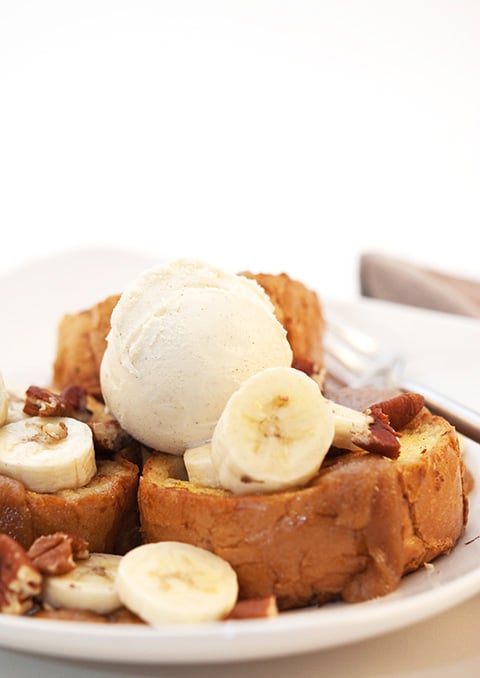 Have you ever had something so simple, but deliciously decadent at a restaurant that you risked embarrassing your dining companions to take a photo of it? This happened to me while recently on vacation. The waiter arrived with my selection and it looked so delicious and beautiful, that I struggled with the dilemma of standing up, hauling out my professional camera and taking the shot. I am often faced with this dilemma, and many times I have passed up the opportunity to photograph an amazing dish as a courtesy to fellow diners. (However, there are times that I regret it later!)

This time, however, I forewarned my companions, and chalked it up to research for work. I can always blame it on my relentless pursuit of photographic and culinary perfection! I am so thrilled that I did because bananas foster french toast was one of the most decadent and beautiful breakfast entrees I had had in a very long time. The soft egg-based french toast was grilled to perfection -- not too crunchy and definitely not soggy. Cascading over the top of the bread were toasted walnuts, fresh bananas, a brown-sugar caramel sauce and a scoop of Tahitian vanilla bean ice cream in the middle. "Yum" does not even begin to describe this sweet breakfast masterpiece.

Beat together eggs, milk, cinnamon, vanilla bean scrapings and brown sugar in a medium bowl until combined. Set aside.

Preheat a large skillet and place 1 ½ tbsps. of butter into the pan. Melt the butter and swirl to coat the pan bottom. Slice 12 (2 inch) thick slices of French bread, dip each side of the bread into the egg mixture. Place into the preheated pan and cook 3 minutes on each side, each side should be a golden brown. Remove from pan and arrange three pieces on a plate or shallow bowl. Continue with the remaining pieces of bread.

Place ice cream on the counter to soften, once softened place in medium bowl and incorporate the scraped Tahitian vanilla bean into the ice cream with a silicon spatula. Cover and place back into freezer to harden (12-24 hours)

Place butter and brown sugar into a medium skillet, cook on low heat until the sugar and butter have melted. Remove from heat and slowly add the rum. Whisk to combine. Return the pan to heat and simmer on low for 3-5 minutes, until the mixture has thickened. Let cool slightly.

Arrange the three pieces of French toast on a shallow plate or bowl, sprinkle with banana slices and toasted walnuts. Pour over ¼ of the brown sugar syrup. Scoop ¼ cup of the ice cream and place in the middle of the plate. Enjoy immediately!