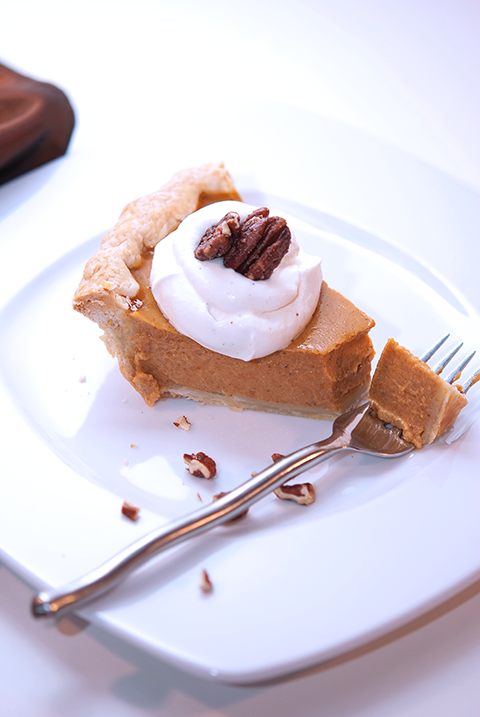 As a child I have wonderful memories of gathering around the thanksgiving table with family. Each family member was blessed with the task of bringing one dish to pass. Our family was so big that we had to set up dinner in my grandparents' basement on the biggest table they owned -- the ping pong table. There was nothing extraordinary about the table until Thanksgiving Day. It was beautifully transformed with white linens, fine china, flowers and candles. A buffet table of saw horses and boards was constructed close to the table and expertly transformed into an elegant buffet with table linens and silver platters. As we gathered around the table, I remember thinking that it seemed as though no time had passed since the last Thanksgiving. I silently gave thanks for having such a great extended family and family traditions.

These traditions included classic pumpkin pie with a flaky crust formed and gathered by my dear grandmother’s hands, rolled out to the perfect thickness, and then folded and pinched perfectly around the edges. When I was much older I begged her to show me how to edge the pies. I still do it the same way she showed me. Once the crust was crimped, she whisked together pumpkin puree, spices, eggs and cream into a smooth custard. The pie was placed in her oven and baked to perfection, then chilled in the “icebox” until Thanksgiving Day. Once chilled, the pie was served with fresh whipped cream, hand whisked until soft, creamy peaks formed.

I still to this day prefer fresh whipped cream, especially when it includes a good vanilla extract or paste. My pie is slightly different from my grandmother’s; the chef in me is constantly experimenting with new flavors. I found that bourbon is a perfect match to the spices in pumpkin pie and the Madagascar vanilla bean paste I used in the whipped cream. Madagascar vanilla bean paste adds a rich flavor, and enhances the bourbon perfectly in the whipped cream.

Whisk together all ingredients except the eggs (Slightly beat eggs and then add to mixture) set aside the mixture and make or buy the pie crust.

Combine flour, salt, and sugar in a food processor; pulse to mix. Add butter and pulse 6 to 8 times, until mixture resembles coarse meal, with pea size pieces of butter. Add ice water 1 Tbsp. at a time, pulsing until mixture just begins to clump together. If you pinch some of the crumbly dough and it holds together, it's ready. If the dough doesn't hold together, add a little more water and pulse again. Note that too much water will make the crust tough. Remove dough from machine and place in a mound on a clean surface. Gently shape the dough mixture into two disks. Work the dough just enough to form the disks, do not over-knead. You should be able to see little bits of butter in the dough. These small chunks of butter are what will allow the resulting crust to be flaky. Sprinkle a little flour around the disks. Wrap each disk in plastic wrap and refrigerate at least 1 hour, and up to 2 days.

Remove one crust disk from the refrigerator. Let sit at room temperature for 5-10 minutes in order to soften just enough to make rolling out a bit easier. Roll out with a rolling pin on a lightly floured surface to a 12-inch circle; about 1/8 of an inch thick. As you roll out the dough, check if the dough is sticking to the surface below. If necessary, add a few sprinkles of flour under the dough to keep the dough from sticking. Carefully place onto a 9-inch pie plate. Gently press the pie dough down so that it lines the bottom and sides of the pie plate.  Pour the pumpkin mixture into the pie crust and bake (325 degrees) 70 minutes until set and crust is golden brown. Garnish with whipped cream and candied walnuts.

In a large mixer bowl, place all the ingredients and refrigerate for at least 15 minutes. (Chill the whisk beater alongside the bowl.)

Beat the mixture until soft peaks from when the beater is raised or the cream mounds softly when dropped from a spoon. Do not overbeat.