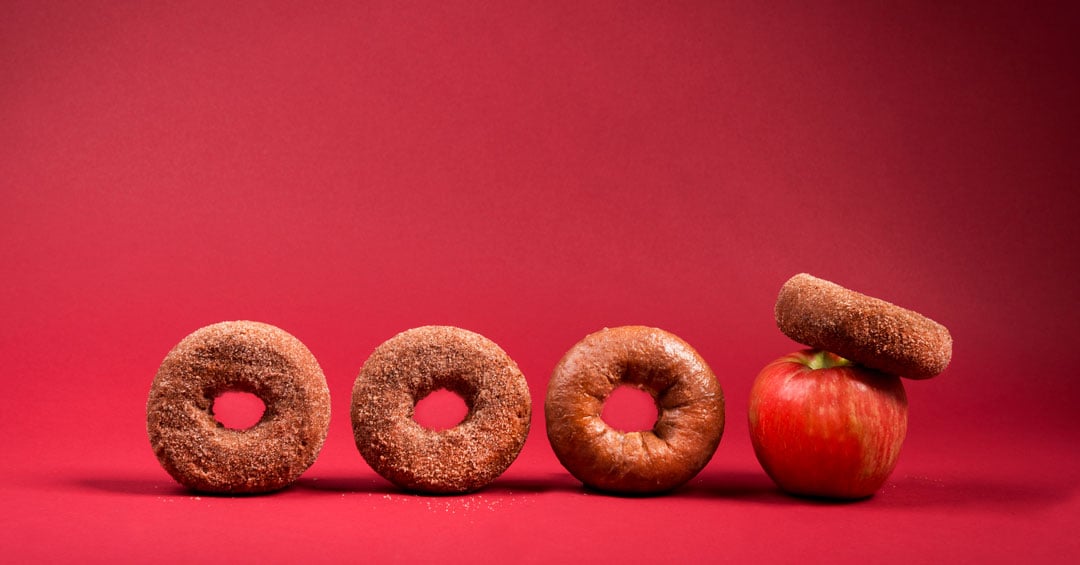 Fall is apple season here in Michigan. There’s nothing better than going to one of the many local orchards and biting into a crisp, juicy Gala or Fuji you just picked yourself. Or is there? While we love a fresh apple, one of our favorite autumnal traditions is another delicacy often offered at orchards: the cider donut. A little sweet and a little spicy, fried apple cider donuts are the essence of fall distilled into a little hoop of chewy, cakey perfection. With our spiced apple cider cake donut recipe, you can enjoy these seasonal sensations any time you want.

As their name suggests, cider donuts are made with apple cider, and they’ve been a mainstay at orchards and cider mills for decades. However, their origin can actually be traced to one of the great donut pioneers, a Russian immigrant named Adolph Levitt. Levitt’s first claim to fried dough fame was an automated donut-making machine, which he used in his Harlem bakery in the 1920s. Dubbed the Wonderful Almost Human Automatic Donut Machine, the device’s moniker may have been a mouthful, but it also made it easier than ever to get donuts into the mouths of the masses. Levitt’s company, the Donut Corporation of America, was soon selling their machines all over the world. The DCA introduced cider donuts in the fall of 1951, as a way to cash in on the public’s fondness for fall. It worked, and they have been a harvest staple ever since.

In addition to the cider, we like to add some chopped apples to give our donuts a little extra flavor and help keep them moist. While many recipes call for tossing cider donuts in cinnamon sugar, ours uses a ginger sugar blend that adds just the right amount of bite to offset the sweetness. What are you waiting for? Donut hesitate to give this recipe a try!

In a shallow bowl, mix caster sugar and ground ginger; set aside.

Bring cider to a boil in a small saucepan; cook over high heat until reduced by half, about 12 minutes. Cool.

Whisk together dry ingredients (except ginger-sugar mix). In a separate bowl, whisk cooled cider, melted butter, eggs, and apples. Stir into dry ingredients until moistened; the dough will be sticky and hard to work with.

Cover and refrigerate for one hour, or until dough is firm enough to shape. Divide in half. On a floured surface, press each portion until it is about ½ inch thick; cut out donut shapes using a floured 3-in. donut cutter.